Is Tony Foulds telling the truth about Mi Amigo? A balanced look at the accusations [UPDATED] 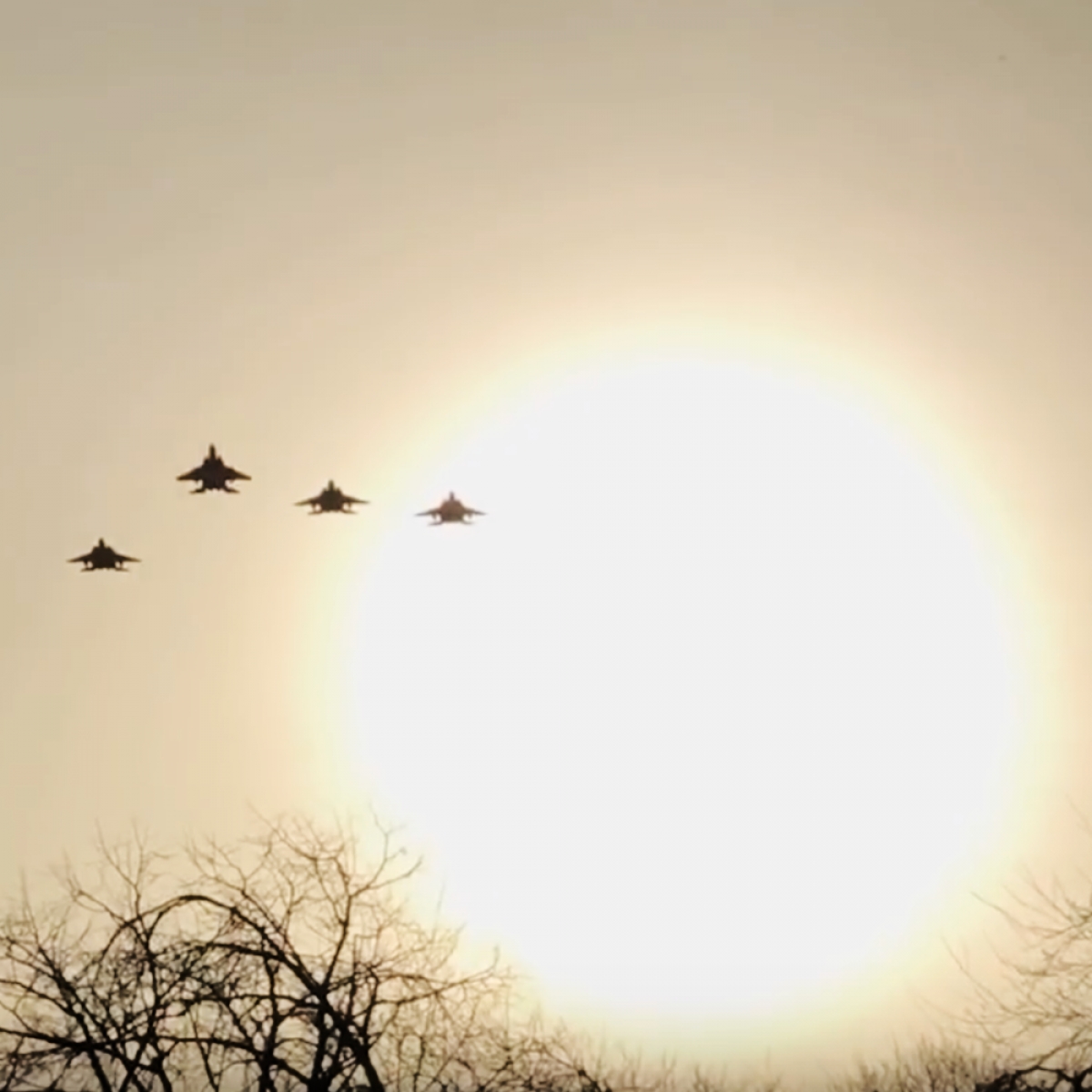 Tony Foulds' accounts of his Mi Amigo experiences are being questioned by locals and historians. Here, we take a balanced and sensitive look at the allegations.

This article has been updated on 10 April 2019 with additional detail, links and commentary.

Its an incredible story - one of a man who has single-handedly been tending to a park memorial to a US Bomber plane crash for decades, ever since that troubled plane, returning from a World War 2 operation, crash-landed avoiding him and his friends playing in the park when he was just 8 years old.

By now many people around the world know the story of Tony Foulds and the Mi Amigo disaster in Sheffield’s Endcliffe Park in 1944.

But that story, or at least Tony’s recollection of it, has been brought into question.

Former Sheffield Star writer Martin Dawes has written a piece on his own website entitled ‘Tony and the Mi Amigo, does it add up?’

The main points of contention appear to be how long Tony Foulds has actually been attending to the memorial, and whether Tony’s story about the circumstances of the crash are true.

BBC reports from when Dan Walker first met the pensioner in January suggest that Tony had looked after to the memorial for a significant amount of time. Many seem to think in terms of decades and watching back footage does seem to suggest that - both Dan Walker’s first tweet about meeting Foulds and subsequently one of the first BBC reports states Tony has been tending to the area, quote, “ever since” - the crash happened.

Just met an amazing man in Endcliffe Park, Sheffield. Tony Foulds was an 8-yr-old playing in the park when a US plane crashed in Feb 1944. He has diligently maintained the memorial ever since. He was planting new flowers. Almost 75 yrs of service. What a man. I’m in bits ??? pic.twitter.com/DpdDmSZ0F3

However, recently revealed footage from a YouTube video interview by Harry Gold shows Tony Foulds himself suggesting he had started visiting the memorial just two years ago. The interview was filmed in November 2018 and uploaded to YouTube in December 2018, well before Dan Walker’s chance encounter with Tony brought the whole story to the public’s consciousness in January 2019.

Interestingly, other accounts of Tony tending to the memorial start around this time (November 2018) too, such as a JustGiving page being set up to financially support Tony with looking after the memorial. Many similar crowdfunding pages have been set up since the story received widespread coverage. Whilst updates to the original JustGiving page show flowers being placed around the memorial, it is unclear whether funds have been collected from other crowdfunders and if so where that money has gone to.

Another video has arisen, showing the pensioner attending the organised Mi Amigo memorial event in February 2018, apparently for the first time - no video evidence from the same channel (which shows several years worth of the memorial event in different videos) appears to show him at any memorial event in the years before that.

Even if Tony has been looking after the memorial for just two years then that isn’t insignificant. How many other people do you know that have quietly dedicated themselves to something seemingly so selfless for so long? Even at two years, Tony should absolutely be commended for all the work he has done.

But on the face of it, things do seem a little murky. Martin Dawes claims to have spoken with an unnamed source at the Friends of Porter Valley, a group who occasionally tidy around Endcliffe Park and indeed the memorial itself. That source says nobody from the group had ever seen or met Tony until Dan Walker and BBC Breakfast brought him to everyones attention, going so far as to say that they had “undertaken some volunteer work day activities at and around the memorial over the years but presumably not at the time or times Tony has been there.”

Dawes also claims to have spoken to Tony himself at the memorial recently and the pensioner insists he had been attending to the site since 1953, something Dawes suggests is odd since the memorial wasn’t erected until 1969.

Martin Dawes also asked Tony about the circumstances of the crash - something Tony has been consistent about in every video and interview I’ve seen from him in saying that the pilot tried to get he and his friends to clear the grass, but they mistakenly thought he was waving at them and just waved back, forcing the pilot to avoid them and instead crash into the trees behind the field.

In fact, in every video I’ve watched regarding this story, only one inconsistency occurs in Tony’s accounts of the day - the BBC sanitised things a little saying that Tony and his friends were simply playing on the field, even suggesting they were playing football, but away from broadcast cameras Foulds tells the story that he was there because he had arranged to have a ‘scrap’ with some kids from a rival school in the park.

Historian David Harvey, author of ‘Mi Amigo, the story of Sheffield’s Flying Fortress’ disagrees with Tony’s story though. In the book he says that claims the plane crashed avoiding children on the field is an urban legend that seemed to start in the 1990s. In his research Harvey spoke to many first-hand witnesses and read numerous newspaper reports and none ever suggested it was the case that the pilot was avoiding children.

As well as eye-witness accounts, it is claimed photographic evidence, would also dispute this version of events. Harvey suggests that had the plane avoided children on the grass the nose of the crashed plane would have been facing uphill, whereas all the evidence shows if pointing in the opposite direction, downhill.

All first-hand witness accounts in fact suggest the aircraft simply ‘spiralled out of the sky’ and dropped on the crash site rather than anything resembling a controlled descent and ‘belly landing’.

A question that has arisen a number of times since concerns were raised is "What does all this matter in the scheme of things?" Historians argue that historical accuracy is extremely important - and it is hard to argue with that point. Without historical accuracy, what history do we really have?

So, what is the story here? Has Tony Foulds lied? Well… I suspect it is much more complicated than that. I’ve watched all the BBC footage, and more interviews with Tony from elsewhere - the interesting thing is that he never himself states how long he had been tending to the memorial for. The presenters all do that for him and he just kind of agrees.

I’m not sure it could ever be proven either way but I have a feeling that he maybe hasn’t been attending to the memorial for nearly as long as suggested. Maybe someone said he had, probably by mistake, he might have felt forced to go along with it from that point.

Remember, this is an elderly man being swept up in a very quick and enveloping media circus and something like that can just daze and confuse you. At some point it might have just been easier to go along with what everyone was saying, especially with cameras and lights pointed at you.

Again, if he has been looking after that memorial for just two years, as he claims in the earlier video interview, then that is an achievement in itself. Other than a bit of fleeting celebrity, and suggestions of a star on the walk of fame outside the town hall, Tony hasn’t really gotten anything out of the story personally to my knowledge, so wouldn’t really have benefitted from purposefully deceiving anyone.

For his part, Tony appears to deny any of the accusations. Speaking to Martin Dawes the pensioner "made clear that he disageed with Harvey's book", insisting that he himself was an eyewitness.

It does seem sad that it took mainstream media coverage to get attention on the memorial and force the council to restore and make the proper repairs to the area around it. I also feel for the Friends of Porter Valley group who have looked after the memorial many times over the years without any real recognition at all for doing so where Tony seemingly gets all the plaudits, and of course historians like David Harvey who has long researched the circumstances of the crash and published books on the subject.

However, what Tony Foulds did help to make happen was incredible. Thousands of people attended the flypast, with millions more watching on TV and that is truly remarkable. He brought the city together in remembrance of 10 men who died 75 years ago. He brought worldwide attention on the city and the story of the crash, and possibly helped to unearth many more similar stories of servicemen who lost their lives in similar circumstances during the wars.

Does his story about the pilot purposefully avoiding him as a child playing on the field add up? I’ll let you and the historical records decide that for yourself based on the evidence.

One thing that is disappointing though is the angle that journalists and news media took on the whole thing - despite repeatedly offering platitudes that “it isn’t about Tony” they continually made the whole thing revolve around him to the point that people are now questioning the integrity of an old age pensioner.

Yes, Tony Foulds was the catalyst and the current human element to the story but going as far as to create hashtags such as #gettonyaflypast and #tonygotaflypast increasingly made things about him rather than what something like #getmiamigoaflypast or #miamigoflypast would have done.

Some kind of backlash was almost inevitable. The media coverage essentially made Tony Foulds a Reality TV star via the medium of news and it is often the case that backlash happens following someone being quickly thrust into the spotlight and then left to fend for themselves afterwards - something that Reality TV has found itself being criticised for recently.

The BBC made a human interest story into fleeting entertainment with Tony Foulds at the centre of it; should they have a duty of care to him - and the story as a whole - now these allegations have come to light?