Slaves to time? The endless debate about posting set times (and what everyone is missing) 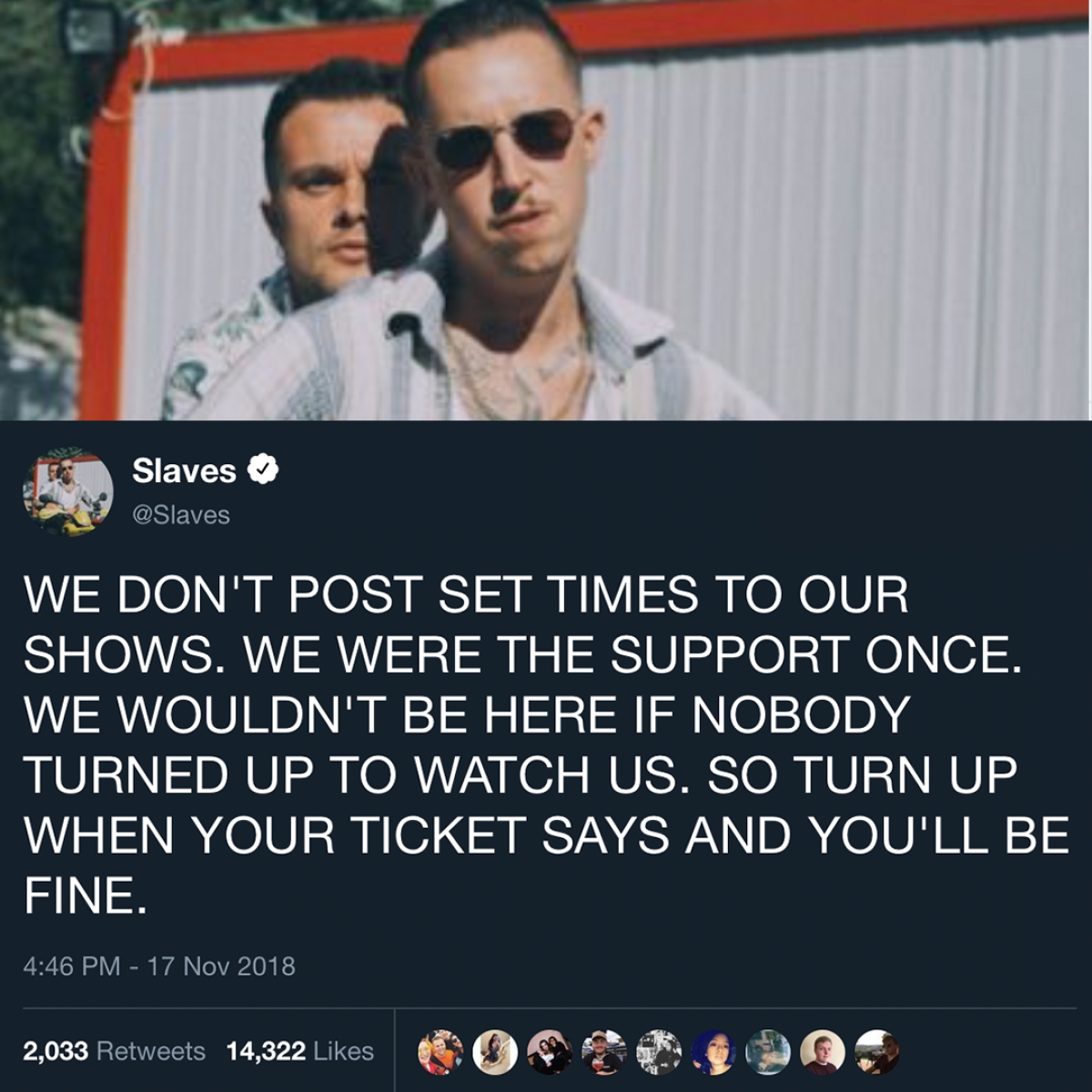 Breakout punk-rock band Slaves stirred the big pot of debate this weekend, posting on Twitter that they never post set times for their shows.

It is a debate that has rattled around the music industry for longer than has been necessary and frankly I’m not sure what people aren’t getting about it.

Slaves’ argument is that posting set times takes away from the support bands. If you know what time the headliner is on then you won’t bother turning up for the earlier slots and may miss out on your next favourite band. Support the supports, as such.

WE DON'T POST SET TIMES TO OUR SHOWS. WE WERE THE SUPPORT ONCE. WE WOULDN'T BE HERE IF NOBODY TURNED UP TO WATCH US. SO TURN UP WHEN YOUR TICKET SAYS AND YOU'LL BE FINE.

Of course the counter argument is that posting set times is catering for fans’ needs. Perhaps they are on a late shift and might not be able to make the door time so are concerned they might miss some of the set of the band they bought tickets for? Maybe they are planning public transport?

Disappointingly some promoters have perpetuated the problem further, stating that it really doesn’t matter. An editorial from RGM states that as promoters they have seen no difference when posting set times compared to when they haven’t.

I have a couple of rebuttals to that article. What kind of event and line up are promoters pushing that it really doesn’t matter what you do with regards to set times, people won’t turn up early to see the supports? Why put supports on in the first place if it really doesn’t make a difference?

Most importantly - and the element just about everyone has missed - in a time when music venues are struggling and closing at rapid pace, what are you doing to get people down early to support not just the music, but the struggling venue too?

It isn’t enough to just put on a gig to support a venue, you have to do everything you can to get people using the venue as much as possible throughout the whole gig, from the start, in order to help ensure that venue’s ongoing existence.

(I’m talking smaller venues here - places that charge stupid amounts for a pint of crap lager deserve their audience sticking next door to pre-load where the beer is cheaper - O2 Academy, I’m looking at you…).

MAKE AN EVENT OF IT - A MESSAGE TO PROMOTERS AND BANDS

The big point here though is that promoters - and bands to an extent too - can tend to treat each gig as just another in a chain of gigs they are doing. They are doing it all the time. It ends up being a job on a production line, a manufactured business function. There isn’t anything special about it.

To a gig-goer it should ALWAYS be special. Promoters should make more of an event of their shows and not just rely on local support bands selling tickets to their mates to get numbers through the doors for a crappy split of the ticket price. Create a line up that compliments the main act, that people NEED to see, make sure you tell people who the supports are and why people should get down early to see them.

Make sure you continuously talk about it. Maybe try something different (a few Facebook updates and £30 of boosting posts isn’t enough promoting). Talk every aspect of the night up wherever you can, from the main act to the supports to the venue to the fans to whatever else you have to shout about.

You know what happens if people think it is something special? If you create a buzz? It BECOMES something special. People get excited about it, they ‘buy-in’ to the idea - and from that they make an effort.

Worries about leaving work and getting to the gig on time? They disappear. If it is SPECIAL, if people are EXCITED for it, they’ll leave work early or book the afternoon off. If they think they might see the next big thing in a support slot, they will make the effort to get in early. They’ll not look to what the latest bus they can get to the venue is - they’ll make the effort to catch an earlier one (don’t get me started on the ‘people need to know the times because of last train/bus home' argument - telling someone what time a band is on doesn’t change what time their last transport home is - what difference does knowing stage times actually make in that scenario?!).

Think of the first gigs you ever went to as a punter - you were excited. You only really knew the ‘doors’ time on the ticket so got in early… and I’m betting you enjoyed the support acts as a build up to the main event, despite never having heard of them before. You might even have found your next favourite band. Tap into those kind of feelings and you’ll not only reap the rewards, you’ll get a reputation for putting on the best shows and people will come earlier to see what you’re putting on.

But most of all… never, ever, ever publicly publish set times*.

* with the obvious exception of festivals and to privately accomodate industry professionals.

Tweet
Published in Features
Tagged under
More in this category: « How to claim your band or artist profile on Apple Music’s new ‘Connect’ service UPDATED: Why Apple Music is the future for bands/artists despite the revenue share »
back to top