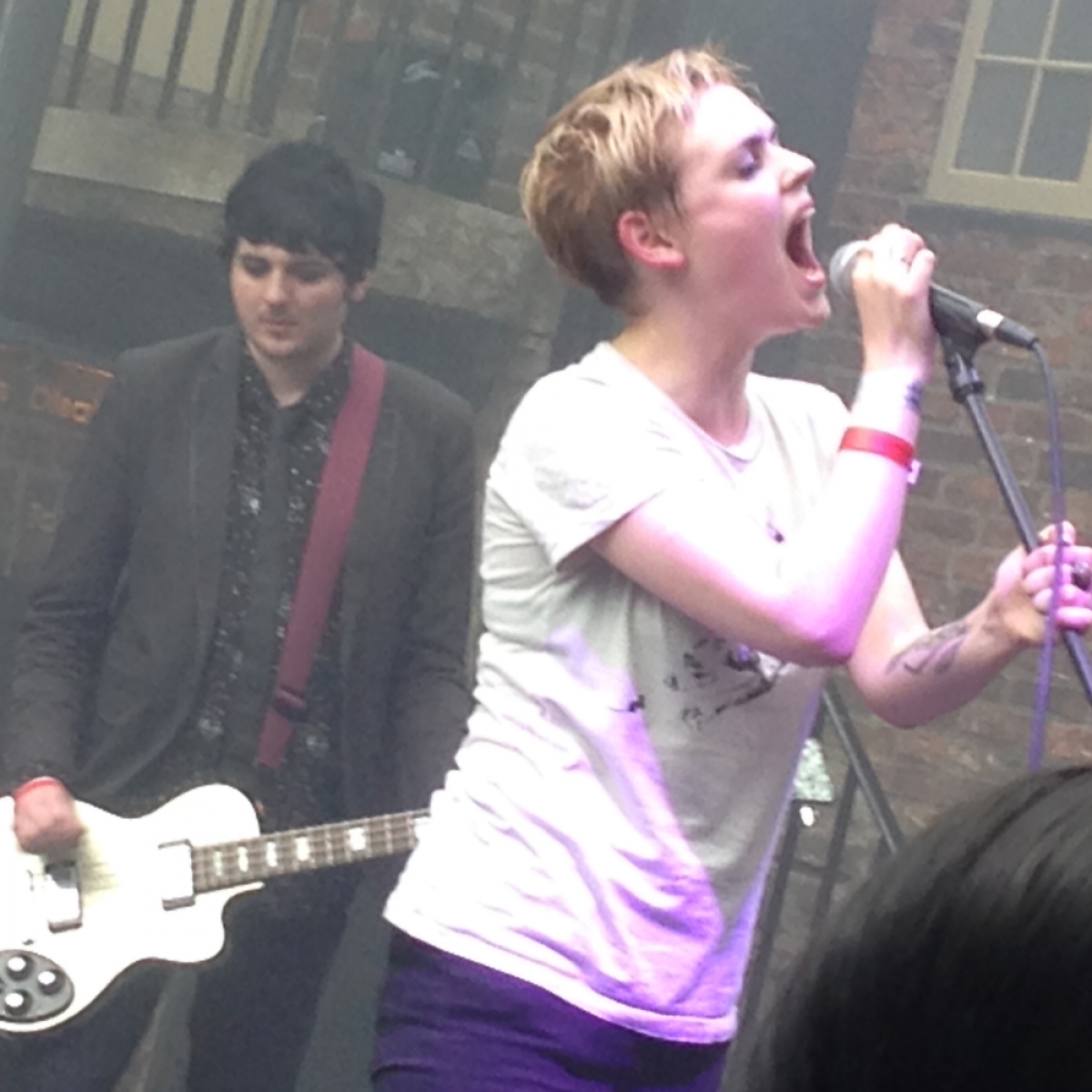 A look back at an extremely successful weekend for the Crystal Stage at Sheffield's Tramlines Festival fringe, where all the biggest up-and-coming bands seemed to be all weekend.

The main stage of Sheffield’s annual Tramlines urban festival moving a mile to the Ponderosa park just outside the city centre might have been a little controversial initially, but was doubtless the right move for an event growing at an aggressive rate each year.

Personally though, I think the real magic of Tramlines isn’t the paid areas - unless there is a specific band you really, really, absolutely want to see. The best part of the festival for any music fan is undoubtedly the plethora of entertainment on offer at the many pubs, bars, shops, clubs and other impromptu stages around the city; best of all the majority of them are free entry with no wristband needed.

Having made its debut to the festival with a cracking line-up last year (and seemingly everyone talking about The Struts’ now infamous gig there), Carver Street’s Crystal bar laid out the temporary-but-impressive staging and lighting once again (how is this place not a regular live venue? It fits like a glove there!). Having spent the past year scouring the country for the finest acts there was only one candidate venue for basing your weekend around.

And what a line up it was. Of course there were no real ‘household names’ here like the main paid areas, but for those in the industry and ardent music fans Crystal’s list was a who’s who of the biggest up-and-coming acts that are quickly building up a big following across the country. Almost all of these acts have the potential to break into the big time very soon (making Crystal the premium ‘I was there’ venue in the entire city throughout the whole festival).

Opening Crystal’s shortened weekend (the venue chooses to disregard the ‘official’ Friday start of the festival) at a bright and breezy 11:15am on Saturday were Sheffield’s own electronic act Resonate. It was the earliest gig of the day across all venues and the slot was added in late, but the drummer and guitarist/vocalist duo managed to impress a small but early building crowd.

Its a shame Resonate started so early as the dance style would suit itself to more of an end-of-night party affair, but still the powerful vocals, exciting drums and live guitar riffs over an impressive range of backing tracks impressed across the venue. Afterwards the band handed a free CD to everyone in the venue - nice touch.

The 48k’s, Kartica and Frazer all closely followed into the early afternoon before a band I’d not seen before made a memorable entrance. London-based Longy turned heads opening with a trumpet solo walking through the venue crowd before staging a stonking half-hour set of their solid ‘gospel trash’ indie. I’d heard glowing things about this band just a day earlier off the back of an apparently kicking set at Leeds’ Verve bar, but didn’t quite expect how good they actually were.

Somehow Dirty Sterling managed to follow it up well too, along with The SSS after that, then the consistently good The Slow Readers Club before Feral Brood took to the stage. Two frontmen and relentless killer rock and roll? Check! Another act that has gone straight on my ‘definitely must see again’ list.

Since the first time I saw them three years ago, one band I absolutely make a point of catching each time they head over to Sheffield from their native Stoke-on-Trent are Moscow. Fair to say they didn’t disappoint. Lead singer Nic Andrews captivated the crowd last year dancing on tables and singing right in the faces of even the furthest back audience members — this time round he danced all the way along the bar and skateboarded-whilst-singing on some of the stage-moving gear. Not only does he look like (and somehow carry off) Jesus and Jim Morrison combined, he entertains in abundance.

Plus, the music is amazing. Think Joy Division meets Editors and you’ll arrive somewhere close. I recently read someone post on Facebook that if Moscow’s song ‘Pack Animals’ was released by Kasabian it would be a national anthem by now and never a truer statement has been said.

Headliners (Crystal rank their headliners differently in terms of placement during Tramlines, adding the potentially biggest draw acts in the early evening rather than right at the end of a bill) Black Honey and Sienna Chorus killed their sets before the next act I was desperate to see again took to the stage in October Drift.

Here is a band that work so hard on refining their live act (and gigging) that its worth seeing each and every show they put on. They somehow managed to lift themselves a whole other level from the rest of the acts, as impressive as they all were. This is dark and meaningful indie rock mixing the influences of Smashing Pumpkins, Interpol, The Horrors and more. The strobes and beams of the lighting rig complimented a furious set of constant energy and movement. If there was one band I would urge anyone to definitely see live from the whole of the Saturday line-up, it HAS to be October Drift.

The venue was then infiltrated by a devoted following of Faerground Accidents, who are getting increasingly popular. This is another band who put on an amazing show first and foremost, complete with singer-in-drag and colourful-trousers-and-shirts band signatures. Channelling the likes of Suede, David Bowie and Pulp it isn’t hard to see why they are building up such a fanbase.

As the rain started to set in towards the end of Tramlines weekend, the indoor Crystal Stage was the perfect base and many took advantage of that through the day. RepoMen opened it all up at midday and provided the cutest moment of the weekend as singer Denzil’s young son joined the band during a number, tamborine in hand.

Stockport’s indie/funk four piece No Hot Ashes followed and impressed so much with a solid and fun set that they must have spent at least half an hour afterwards meeting new fans, selling and signing CDs for them all.

Then something happened. The Jackobins hit the stage. I’ve already read one fairly harsh review of the set online and whilst some criticisms are perhaps warranted (frontman Dominic does have an abundance of almost cliched power poses that would have made even Freddie Mercury blush), boy did they put on a show. Dominic can sing and has real range. The guy was belting out the songs with not a struggle or wobble on any of the long refrain notes.

Additionally, for me The Jackobins entertained; dancing and singing on the bar, walking through the crowd and striking a pose on top of the tables. They did it all. Photographers were lapping it up, chasing the lead singer around — as I tweeted at the time, these guys are a snapper’s wet dream and I suspect we’ll see many of those pictures in the coming days.

The Mexanines (every band should come complete with their own light up sign with their name on!), Clubs and Delamere rounded up the afternoon’s sets before headliners Desperate Journalist headed on stage at 5pm.

Desperate Journalist — what can I say? I saw them for the first time earlier this year and instantly fell in love. I told everyone who would listen to come and catch them at Tramlines Crystal Stage because I knew it would be special. They seemingly listened (the place was packed). And boy, was it special.

The comparison with The Smiths (albeit with a female lead) is obvious and perhaps a little lazy. Throw in a further comparison with Joy Division. Then mix it up a little and add some of The Cranberries in there. Perhaps even a little Bjork in places. I could keep going all day but all comparisons aside this is one truly brilliant band. Melodic lead guitar, strong basslines, perfect drum beats and an hypnotic vocal to die for.

Desperate Journalist’s tight and visual performance lifts it all up further; singer Jo Bevan wrapping the microphone lead around her neck and torso whilst contorting her body in Ian Curtis style whilst pushing her perfect vocals, the guitarists moving with every strum or pick and the drummer jumping on the kickdrum pedal throughout. I’ve not even mentioned that Desperate Journalist has a female drummer. There’s no need, its no gimmick — this is one special all-round band and one I absolutely insist you urgently see live. I’ve been listening to their album non-stop while writing this and seriously enjoying it.

You’d think the rest of the evening would be a come down after such a great performance, right? Wrong. It simply laid the foundations for even more greatness.

The Kavaliers impressively supplied their brand of anthem indie rock before another female-fronted indie-pop band, Scarlet, took to the stage and killed it (another one for the ‘definitely see again’ list). The consistent Sabella rocked the crowd and soon enough we were heading towards the end of the night and the festival…

Before it was all over though, Leeds-based The Barmines started a trilogy of yet more stand out performances. Always impressive anyway, it seemed the quality of what went before lifted them further on this occasion and their infectious indie rock had the crowd buzzing. The Barmines managed to create a rock-and-roll party atmosphere befitting the end of a quality festival line up.

Hands Off Gretel had to follow The Barmines and stepped up to the occasion, continuing that party atmosphere with their 90s influenced grunge style and post-punk get up. This is another of those ‘going places’ bands who seem to tightly consider everything they do, from the look and feel (singer Lauren Tate has to be one of the most photogenic frontwomen in music right now) to the music and lyrics — and they get it all perfectly right.

The last set of the evening was filled by The Ruby Blues who impressively closed the whole occasion with a mighty set of brilliant blues rock.

And so a good time was had by all! With organisers already confirming there will be a Crystal Stage next year and that the search for the best bands from across the country has already started I know where I will be basing my Tramlines festival weekend next time too.

Tweet
Published in Reviews
Tagged under
More in this category: Reviewing the reviewers: what makes a bad review and how honest should a review be? »
back to top